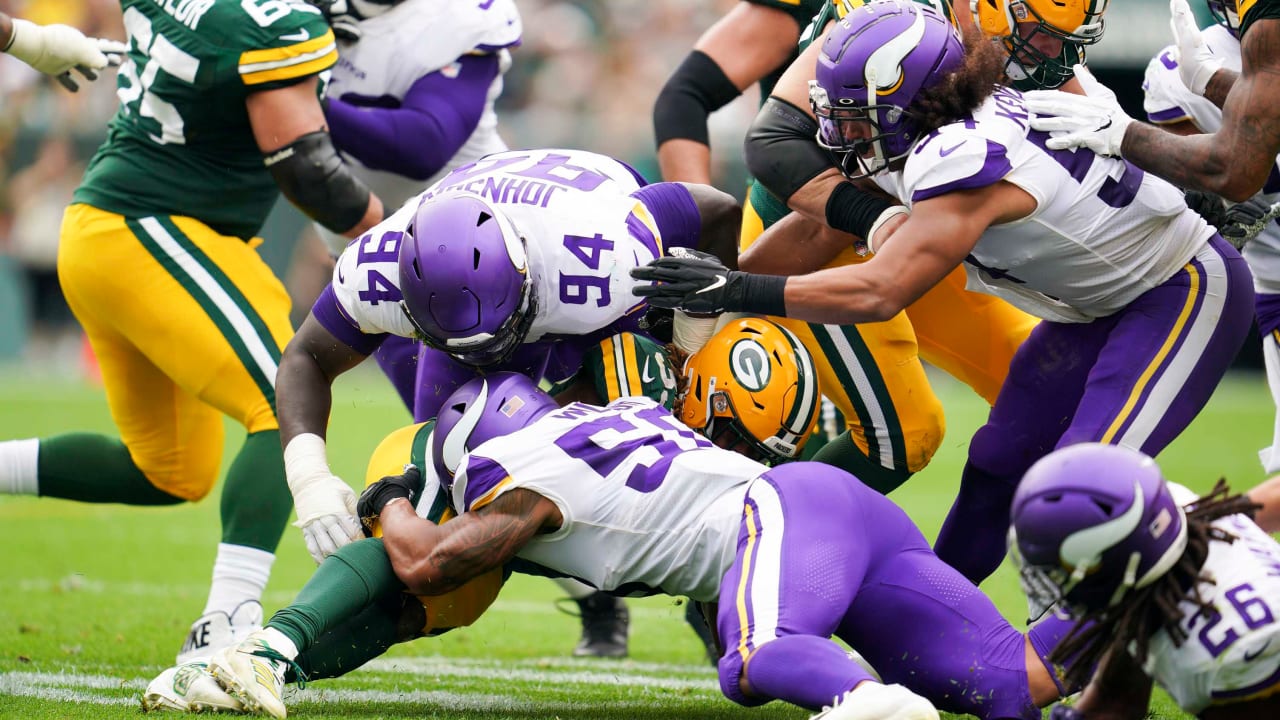 GREEN BAY, Wisc. — The effort was there, but the execution at critical spots of the field wasn’t.

Subpar results on offense and defense in the red zone stung Minnesota on Sunday in a 21-16 loss at Green Bay.

The Packers reached the red zone on each of their first three possessions and finished each drive with a touchdown in building a 21-point lead in a little more than a quarter.

The Vikings, conversely, advanced the ball inside the 20-yard line two times and managed just three points out of the red zone trips.

Pregame question: How would Minnesota handle its first in-game adversity of 2019?

The Packers caught the Vikings with a “miscommunication” on the first play of the game for a 39-yard gain on a pass from Aaron Rodgers to Davante Adams. A screen pass three plays later went for a 15-yard touchdown from Rodgers to Jamaal Williams.

After a missed field goal by Minnesota, Green Bay put together an 11-play drive that covered 63 yards and ended with a 12-yard touchdown pass to Geronimo Allison, who was working in the slot against Nate Meadors, a rookie defensive back who was added to the 53-man roster this week.

“Typically, we’re pretty good in the red zone, but today we weren’t good enough,” Vikings Head Coach Mike Zimmer said. “They found some of our substitution guys and hit them early. We had to make some adjustments.”

(The Vikings were without first-team nickel defensive back Mackensie Alexander, who suffered an elbow injury in Week 1, and Mike Hughes is still working his way back from a torn ACL injury).

The Packers needed to go just 33 yards to go up 21-0 after Kirk Cousins fumbled while being sacked. Cousins had fumbled on the previous play during a scramble, but rookie Irv Smith, Jr., recovered that one.

It was no dice on the second, and the Packers piled on with a 15-yard reception to Adams against Rhodes on the ensuing play. A 9-yard run and a 7-yard pass put the ball at the 2, and Green Bay plowed in with a 2-yard run by Aaron Jones.

The defense adjusted and recovered a fumble by Allison on the next possession, forced four three-and-outs, came up with a stop on a fourth-and-1 and didn’t allow points for the final 46 minutes.

The offense was able to get a few more big plays, but they were overshadowed by penalties.

After a 61-yard catch-and-run by Chad Beebe placed the ball at the Green Bay 3 with less than two minutes left in the first half, a touchdown pass from Cousins to Stefon Diggs was challenged by officials and overturned because of a pass interference that was added against Dalvin Cook.

Minnesota scored on its second possession of the second half, erasing an offensive pass interference call against Thielen on a 42-yard throw to the end zone a play after Minnesota recovered a fumbled snap.

The Vikings rebounded when Cousins connected with Diggs for a 45-yard touchdown on third-and-13.

Diggs, however, was flagged for unsportsmanlike conduct after the play because he took off his helmet before leaving the field. The ensuing PAT was from a distance of 48 yards and blocked.

The Vikings defense kept stymying the Packers offense, keeping it a one-score margin.

Minnesota had a golden opportunity in the fourth quarter, advancing the ball to the Green Bay 8 for a first-and-goal, but Cousins took a shot at trying to hit Diggs in the end zone, and Kevin King came down with the football.

The costly interception with 5:10 left in the game occurred after gains of 8, 3 and 14 on the ground. It proved to be the final scoring opportunity of the day.

“I shouldn’t put [Offensive Coordinator Kevin Stefanski] in that position,” Cousins said. “I should throw the ball away and move to the next down. We had run the ball well. That’s a huge positive for the first two weeks of the season, a huge improvement is running the football well. When you do that, you can win games, so I’m encouraged by how well we ran the football in the first two games. I think that’s something that will serve us well going forward.”