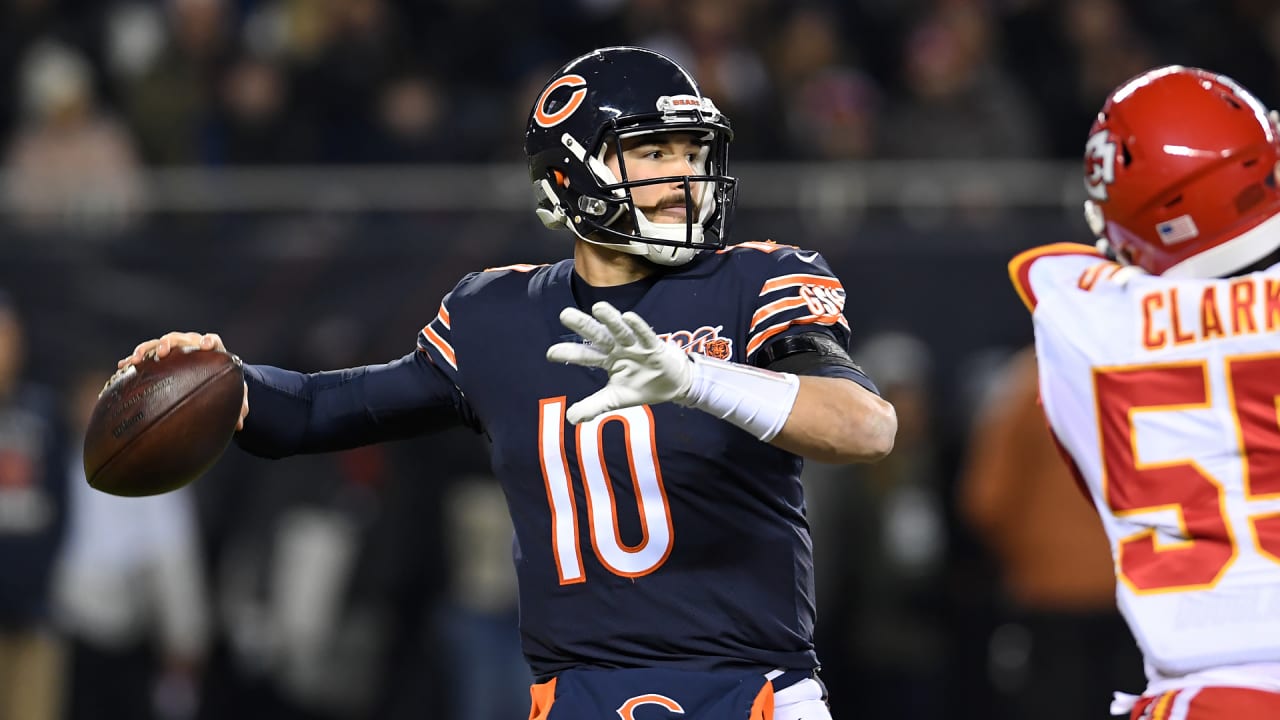 Last season when he was named a Pro Bowl alternate, Trubisky passed for 3,223 yards with 24 TDs, 12 interceptions and a 95.4 rating that ranked 19th in the league while also rushing for 421 yards on 68 carries.

Trubisky has had a roller-coaster campaign in 2019. After mustering only five touchdowns in the first seven games, he generated 13 TDs (11 passing and two rushing) in the next five contests, helping the Bears improve from 3-5 to 7-6. In back-to-back wins over the Lions and Cowboys, he threw three touchdown passes in both contests while posting passer ratings of 118.1 and 115.5.

But in the two games since, Trubisky has produced just one touchdown and recorded passer ratings of 64.4 and 65.4 in losses to the Packers and Chiefs.

“You see really good games and then you see some really bad games,” Trubisky said. “The consistency just hasn’t been there. I think I could be a lot more of a consistent quarterback in the future.

“That’s how I’m trying to finish up in this last game [Sunday in Minnesota]; just make good decisions, get the ball to the playmakers, be a consistent quarterback and put my team in a good position to win. I feel like a lot of the games where I’ve played really well, I’ve done that this year.

“But other times I haven’t, and that’s not doing my job. That’s where the frustrating part comes in and I’ve just got to continue to look within myself and know that it’s in there. You see it at times, but other times it’s not there, which is inconsistent. I’ve got to be better.”

Trubisky is an optimistic person, but he also is his own harshest critic.

“I haven’t played the way I wanted to play in a lot of these games and that’s frustrating,” Trubisky said. “You try to look at some of the positives, but I just continue to stay hard on myself and know that I’ve got to be better.”

As Trubisky prepares for Sunday’s season finale against the Vikings, he hopes to help the offense revert to the way it performed during a stretch of four wins in five games from Nov. 10-Dec. 5.

“We were really good on third down,” he said. “We finished in the red zone. And we took care of the football. Usually when you do those three things, you’re pretty good as an offense. A lot of times for us it’s starting fast and being good on first and second downs so you’re in those third-and-manageable situations. Just keeping the defense guessing and then explosive plays.

“When those explosive plays come, it really gives the guys confidence. It builds rhythm within our offense and we’re really just rolling at that point. So we’ve got to get back to that and continue to find more consistency.”

With the Bears eliminated from playoff contention, Trubisky acknowledged that remaining mentally focused will be “a big challenge” for the team heading into Sunday’s season finale.

“We’ve just got to be even [more] focused on our job and continue to just lock into the little things,” Trubisky said. “Try to push these guys to get better this last week and hopefully you’ve got to believe that the things you do this week carry over to next year.

“It’s just life. How you do anything is how you do everything. You’ve got to believe that. So just continue to stick to the plan. Believe in the process and continue to get better. Just keeping the guys locked in and you just want to end on a high note and that’s getting a win and that’s what we’re playing for.”