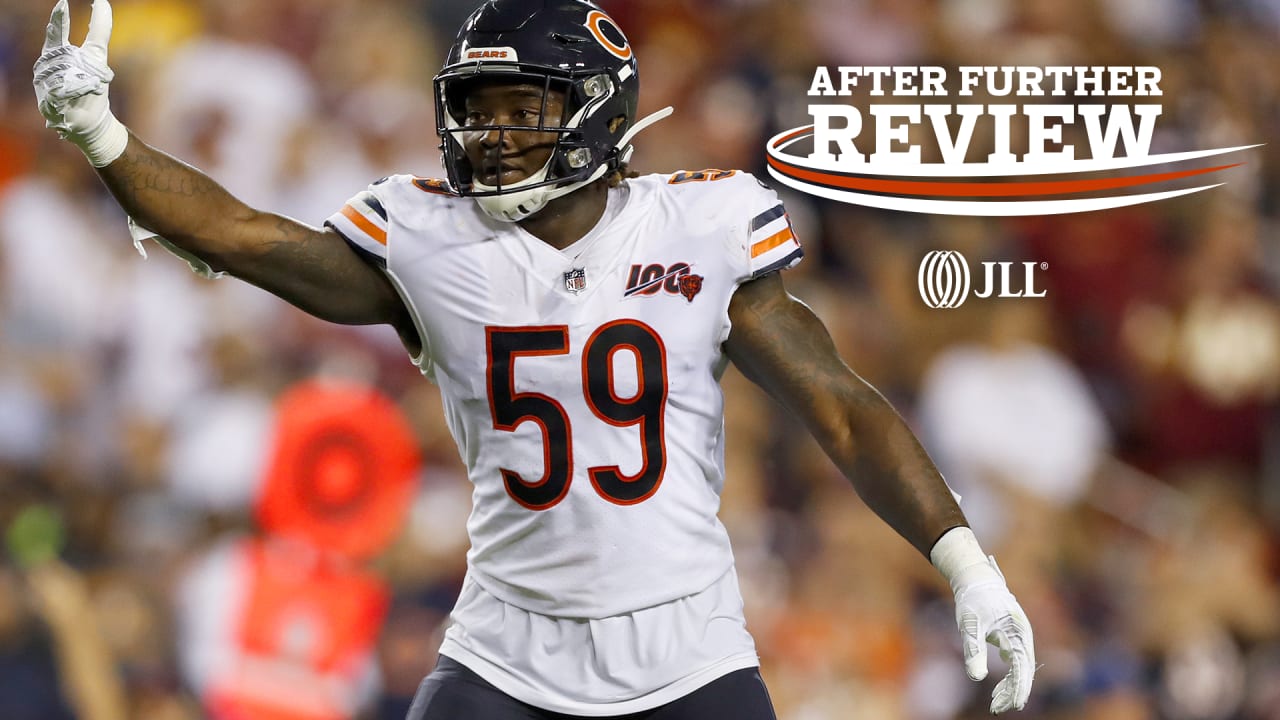 (2) The Bears showed their character and mettle by rallying from a 17-0 deficit to take a 21-17 lead late in the third quarter.

All three phases contributed to the comeback. The offense produced three touchdowns, including two TD passes from Chase Daniel to Allen Robinson of 4 and 16 yards. The defense generated two takeaways and forced two punts on four possessions. And Tarik Cohen set up a touchdown with a career-long 71-yard punt return.

“The biggest positive that I took from this game is that after being down 17-0, our guys never gave up and let that be a 34-0 game,” Nagy said. “Within one quarter, we scored 21 points, took the lead. [But] we didn’t finish. Is it good enough? Is it consolation? No, but I think we need to understand that we had that in us. And so down the road if that is to happen again, we can come back and make it a game and then finish it the next time. That’s the positive.”

Regrouping in the locker room at halftime, the Bears were determined to get back into the game in the third quarter.

“A lot of guys felt like we had to respond, and I think we handled it well,” said linebacker Danny Trevathan. “You want to see that from your team. It’s not the result that we wanted, but we know the character of guys that we have. We’re going to fight until the end.”

“Any time you’re down in the NFL 17-0, it’s always hard to come back,” Daniel said. “They’re good teams. But when we went in at halftime, there was no panic. There was cool, calm, let’s go make a play, and the whole thing was one-play-at-a-time mentality, and I thought we really did that for the most part.”

(3) The Bears were marching toward a possible game-tying field goal late when Daniel threw an interception that sealed the loss.

Taking over at their own 25 with 1:57 remaining following the Raiders’ go-ahead touchdown, the Bears marched to the Oakland 47 as Daniel completed 3-of-4 passes for 28 yards.

But on second-and-10 with 1:22 to play, his deep pass intended for Anthony Miller floated into the hands of Raiders cornerback Gareon Conley at the 23.

“[Conley] fell off late, right as Chase was getting ready to throw it,” Nagy said. “Chase didn’t have vision to [Conley] and he fell off. It looked like read-wise [Conley] made a good play of falling off on it and you end up seeing it’s a throw into double coverage.”

“Chase is frustrated. He knows that in that position there he just lost sight of where he was at. We talked [Sunday] night, but he feels like he could have dumped it down, but he didn’t, and again we’ve got to use these scenarios and plays to learn from it.”

The interception probably at least would have been contested had Miller run his route a little bit higher. “He flattened it off so it really looked like there was no one there,” Nagy said. “He’s supposed to go a little bit higher with his corner route, so at least maybe he’s there to knock the ball down. But at the same time, Chase would be the first to tell you that he wishes that he wouldn’t have made that throw.”